Janaka Malwatta, courtesy of ESPNcricnfo, where the title is “The last of Sanga”

Kumar Sangakkara‘s stellar ODI career is approaching its final denouement. He has already played his last ODI in Sri Lanka. It is very much hoped that he will continue to grace Test cricket yet a while, but after the current tour of New Zealand and the small matter of a World Cup, his ODI adventure will be over. 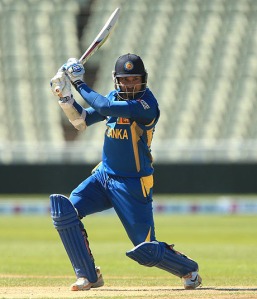 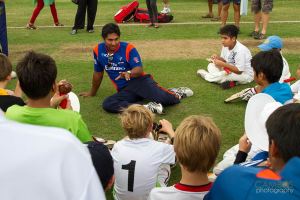 It has been quite some ride. As Sangakkara has grown into his game, his performances have reached stratospheric levels. The statistics are mind-boggling. In 2014, he scored 2868 runs across the three formats of international cricket, beating Ricky Ponting’s record for runs scored in a calendar year. He has scored over 1000 runs in ODIs in a calendar year for the last four years running, and has done so six times in total. He has accumulated 13,580 ODI runs, which puts him third on the all-time list. He has 20 ODI hundreds and a staggering 93 ODI fifties. He has 472 ODI dismissals to his name, 376 as wicketkeeper, including 96 stumpings. He has won, among others, the ICC’s ODI Cricketer of the Year award in 2011 and 2013, and the Man of the Match in the 2014 World T20 final.

Sangakkara is a cricketer created rather than born. He was, in fact, a schoolboy tennis prodigy, and concentrated on cricket relatively late in the day. He might lack the natural talent of Aravinda de Silva or the intuitive brilliance of Mahela Jayawardene, but through sheer will and an immense capacity for hard work, Sangakkara has made himself the most successful batsman Sri Lanka has produced.

Much in the vein of Younis Khan, another master technician, Sangakkara is a remorseless accumulator of runs. He scores steadily, without fuss or spectacle. He is not above beauty, demonstrated by his unfurling cover drive, but he is at heart a pragmatist. He plays more often than not in crisp straight lines, eschewing the delicate cuts and the wristy brilliance of his more aesthetically pleasing countrymen.

Paradoxically, for a man who is a fiercely proud Sri Lankan, his batting style is curiously un-Sri Lankan. Or perhaps it would be more accurate to say he has taken those elements of Sri Lankan style that work for him and eliminated the more extravagant aspects. For Sangakkara is a fine calculator of risk, an expert judge of probabilities, his senses keenly calibrated to sniff out the tiniest advantage or the merest suspicion of danger. He is always looking for any innovation that will keep him ahead of the opposition, as when he spurned IPL riches to prepare for the tour to England with a stint in county cricket with Durham. His preparation is always meticulously planned, his practice relentless. It’s exhausting simply to think about the amount of work that must have gone into maintaining those standards over such a long period of time.

He plays more often than not in crisp straight lines, eschewing the delicate cuts and the wristy brilliance of his more aesthetically pleasing countrymen

The cornerstone to his success has been self-belief and will power. Perhaps where he and Jayawardene will be most missed is in the attitude they bring to the Sri Lankan team, and the example they set, of expecting to win, of not taking a backward step, of truly believing that they are more than good enough to compete with the best in the world. The other example he and Jayawardene set is in their charitable works. Sangakkara’s Bikes for Life project, under the auspices of Kushil Gunasekera’s Foundation of Goodness, has gifted 3000 bicycles to needy villages in war-affected northern Sri Lanka. 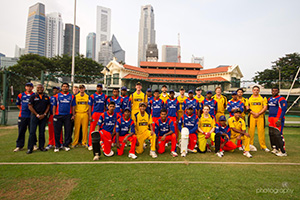 Sangakkara, like all the greats, has a sense of occasion. He ensured he scored a Test hundred on his last appearance at Lord’s. In his last ODI match in his home town (if not on his home ground), Sangakkara proceeded to yet another hundred, against an enervated England attack. The occasion demanded it, and Sangakkara delivered.

He will undoubtedly seek a fitting send-off in the upcoming World Cup. The 2011 World Cup final is probably the failure he feels most hurt by. Sangakkara, then the captain, was a helpless figure behind the stumps, as Gautam Gambhir and MS Dhoni casually dismembered the Sri Lankan bowling attack. It is the only time Sangakkara has looked lost on a cricket field. He will, however, need a lot more from his team than they have demonstrated in New Zealand, notably from the middle order and the bowling attack, if he is to achieve that ambition. 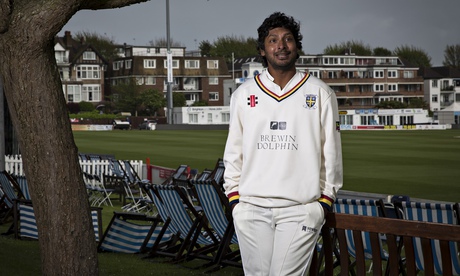 Perhaps we should with on a quixotic moment that epitomises the enduring charm of cricket. In his last ODI on home soil, at the Premadasa Stadium in Colombo, a match in which Jayawardene also made his final appearance in Sri Lanka, both men were upstaged by Tillakaratne Dilshan, the master of cricketing theatricality. With victory assured, Angelo Mathews demonstrated that there is still, even at this level, romance in cricket. He tossed the ball to Jayawardene. When James Tredwell obligingly trotted past a ripping offbreak, the last wicket to fall recorded a new partnership for the old firm: “st Sangakkara b Jayawardene”. Champions always find a way to make their mark.

Janaka Malwatta is a poet, doctor and cricket lover who lives in Brisbane. @janakamalwatta

For BLOG COMMENTS go to http://www.espncricinfo.com/blogs/content/story/824313.html 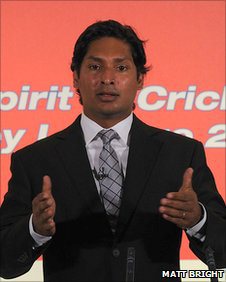